When I came back from my trip everyone asked me what was my favorite part of the trip. My favorite part of the trip was not the food or the place or a building. My favorite part was experiencing the audacity of the human spirit to build something like Petra. Witnessing the strength of human faith which resulted in a city as beautiful as Jerusalem. And watching the world getting divided because of geopolitical differences.
When I first saw the beauty of “The Treasury” ( Petra ) in “Indiana Jones and the last crusade”, I was awe-struck. I was around 15 years old and the fantasy of searching for the Holy Grail became one of many dreams. And 15 years later it was time to put on the cap and set out on the quest of the Holy Grail and feel like Indiana Jones. 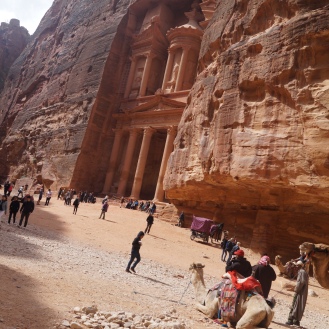 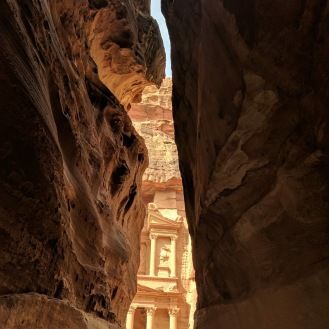 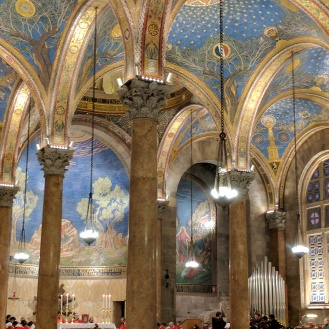 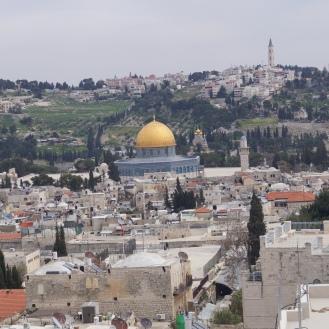 Jordan has two sides, one side which is insulated by the impact of tourism and other side which has evolved into a tourism hub. These two sides easily identifiable by the difference in communication and how the financial transactions are conducted in different parts.

Amman is the capital city, but not very tourist friendly as far as infrastructure is concerned. People are really helpful, but they don’t speak much English. It is difficult to move around the city because communication is little difficult. Use google translate and you are good to go.

Now the good part, Amman is the city where you can bask in the local culture which is not yet influenced by the tourism. Take a stroll into local markets and you can see families going around for shopping, cars from the long lost era, hotels churning out yummy shawarmas and bakeries displaying their varieties of breads and savories.

A couple of hours from Amman you will get to see Jordan’s side of The Dead Sea. The dead sea itself is a marvel of nature and you have to step into it to believe in its magic. A disclaimer: Do not put your head into the water or taste the water, you will regret it :).

The best part of being at Dead sea is to see the locals getting together singing and dancing. Walk up to the locals give them a big smile and you can be the part of the festivities too.

A rustic bus ride through the desert and you will reach the beautiful valley of Petra. The beauty of The Treasury is a pinnacle of the human spirit and design capabilities. If you are feeling adventurous enough, you can climb 1000 steps to visit The Monestry. It is another piece of stunning architecture which was used as a prayer place for the kingdom.

The whole valley is a specimen frozen in time.  The whole place is carved out of sandstone mountains. It’s a completely preserved evidence of a once flourished civilization. The whole valley has beautifully paved pathways, water canals, watering hole, living quarters, temple, church and an amphitheater. As the sun sets down the color of structures start changing from yellow to a beautiful pink. To enjoy the beauty of The Treasury under the star studded sky with hundreds of flickering lamps, plan your trip

Petra valley makes you feel like Indiana Jones and every turn you take every structure you see makes you feel you are a treasure hunter.  Moving from ancient civilisations it was time to see a place which might be one of the greatest influence on the Modern Society.
Israel – A country which is the birthplace of one of the largest religions in the world and also the site for one of the longest-running civil war in the history.

You take a bus from Petra to the border town of Aqaba and then get a unique chance of a crossing the border on foot to Israel. After crossing the border you can inform the security folks and they will help you get a taxi. Take the taxi to the beautiful beach city of Eilat, you can spend a peaceful day at the beach.

From Eilat, you can take a bus to Jerusalem.

Once you reach Jerusalem you can taxi to the check-post or take a bus to Palestine from the old city of Jerusalem.

Bethlehem is the fabled city, the birthplace of Jesus. It is fascinating to see how such a small city became the center for one of the largest religions in the world. You can literally walk around and see most of the important places in Bethlehem.

The Church of Nativity is place believed to be the place where Jesus was born. From outside it looks like a single church but when you step inside you see it’s a culmination of different churches like Roman Catholic, Greek Orthodox etc.

This church has went multiple rebuilding phases as different empires who took control of this city. But you can still find the hints of previous structures too. There is a cave which is believed to be the place where Jesus was born . There are lots of stories and legends attached to the place. Walk into any local shop and start chatting with the locals and you can listen to all the history attached to this place. Don’t miss out on walking around in local markets and savoring on local cuisine.

Church of Milk Grotto is another interesting church in the area with an amazing story attached to it. The church is pure white in color. The walls, the pathway the statues everything is white. According to legend Marry and Joseph were fleeing from the troops of Harod and they took refuge at this church. Marry was feeding the infant Jesus and a few drops of milk fell on the floor and turned the whole place into milky white. This is also called the church of fertility, couples come here in hope of treating their infertility.

If you wanna move away from religious architecture and have an inclination for politics, than 2 kms away is the wall which separates Palestine from the rest of the Israel. The wall is a witness of the longest running civil war in history. The Wall is full of graffiti and slogans. The wall is a stark mixture of the message of peace and stories of oppression and war.

It is time to go across the wall, you can get on a bus service which takes you across the wall to the old city of Jerusalem. Do not forget to take your passport and the blue colored tourist permit which you will get at the immigration. There is a restriction of travel between Israel and Palestine but tourist can move across freely.

Once you reach the old city, trust me, you will forget everything about the rest of the world. The Old city is barely 1 sq km in radius and has a major religious site for 3 different religions.

Christians, Jews and Muslims all three religion have religious sites of great importance in the Old City. The old city is divided into different quarters and each quarter has people from the different cultural background. For example, there are Muslim quarters, Christian quarters, Armenian quarters. When you walk across these quarters you will see the difference in clothing, houses even the market looks different. It’s quite an experience to walk around in the old city markets.

Walk into David’s tower museum, which is in the old city and you can learn about all the history which resides in this city. Also walk up to the top of the castle and you can get a stunning panoramic view of the city.

Once you get the dose of History, It’s time to bask in the glory and faith of The Church of the Holy Sepulchre, the place which is believed to be the final resting place of Jesus.

Even if you keep the faith and religion aside, this church is a stunning piece of architecture. It has a slab of stone which is believed to be the door of Jesus’s tomb which got broken into pieces when he was resurrected on the third day. And the tomb itself is just pure beauty, the pictures don’t do justice.

Just a few minutes walk and you will come to a beautiful golden tomb, bask in the beauty of Arabic/Muslim structure. Non-Muslims can only enter the Dome of Rock during specified times and days. So be ready to stand in long lines.

Another walk around the Old City and you will reach the Western Wall, an only remaining part of an ancient temple and a holy site for Jews. I haven’t interacted with Jews before and it was learning experience for me. The wall is the holiest site for Jews.

Once you are done walking around, just stand in the old city and soak in the energy of faith, equilibrium and peace. This place is an example of co-existence and how to respect others even if they don’t share your beliefs and faith.

Every time I pack my bags and travel, it makes me a better person. It gives me the better understanding of the world. Traveling teaches me what love, compassion and humanity means. So pack your bags and join me for the next adventure.